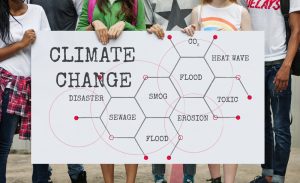 If the weather in your area seems unusual or extreme at times, you can blame it on climate change. While our planet’s climate goes through natural changes over long periods of time, people are making things worse by burning fossil fuels. These changes are making the Earth warmer overall, which is causing quite a few problems. Climate change is an issue that affects everyone on the planet, so doing your part to help stop it is important.

How Are People Causing Climate Change?

People burn oil, gas and other fossil fuels for many reasons, such as producing electricity, driving cars around and heating homes. When we do this, the fossil fuels we use give off gases that trap heat in our atmosphere. This makes Earth’s temperatures warmer, which leads to climate change.

What Kinds of Changes Happen?

Higher temperatures overall doesn’t mean that every place on the planet becomes hotter. Instead, we experience a wide range of changes, including:

There are many steps you can take to help stop climate change, including:

While these steps might seem small or easy, they add up to big changes when more and more people start doing them. Talk to your family and friends about how they can join you in stopping climate change and making the planet healthier for all of us.