The Awe-Inspiring Monasteries of Meteora 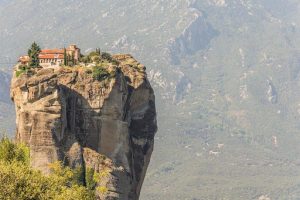 Meteora means “suspended in the air,” and the monasteries of Meteora seem to reach halfway to the sky. These buildings have perched on the top of steep, narrow sandstone cliffs in Thessaly in central Greece since the Middle Ages. With their red roofs and gray stone walls that match the cliffs, the monasteries are an awesome sight.

These magnificent monasteries are often the inspiration for many movies because they seem so otherworldly.

The cliffs rise as high as 1,800 feet. The views from the monasteries are spectacular, with the Plain of Thessaly spread out far below as far as the eye can see.

Who Built the Monasteries of Meteora?

Throughout history, people believed the rock formations of Meteora were special. Long before the monks arrived in the early Middle Ages, Meteora attracted hermits and worshippers who were drawn to the site they believed was between heaven and earth.

In the 14th century, the monk Athanasios Koinovitis brought his followers to Meteora, seeking a secluded and quiet place for contemplation and worship. From 1356 to 1372, they built the first and largest of the Meteora monasteries, known as the Great Meteoron Monastery.

Monks continued to build monasteries on the cliffs through the 16th century. Eventually, there were 24 monasteries. Six of them remain today. The rest are mostly in ruins.

Challenges in Building the Meteora Monasteries

As you can imagine, it wasn’t easy to get building materials up the cliffs! The monks used a system of ladders, pulleys, nets, and baskets attached to ropes to haul themselves and the materials up the rock formations.

The difficulties in getting up the cliffs turned into a benefit when, in later years, monks needed to escape war and persecution. For hundreds of years, they found safety at Meteora. After they ascended to the monasteries, they would pull up the ladders, baskets, and ropes behind them. No one could follow them up the cliffs.

Do People Still Live in the Monasteries of Meteora?

A small number of monks and nuns still live and worship in the Meteora Monasteries. Most of the people there now are visitors. Thousands of tourists and pilgrims visit every year.

How Do You Get to the Meteora Monasteries?

In the 1920s, stairs were cut into the rocks, and bridges were built. This made it much easier for the monks to get to the monasteries. They no longer had to climb ladders or get pulled up in buckets.

In the 1960s, paved roads were built, which made it easier for visitors to access the monasteries.

If you visit the monasteries, you can drive up to the monasteries, or you can hike up. The hike is beautiful, but steep, and includes stairs. To reach the Great Meteoron Monastery, you will need to climb more than 300 stairs. Several of the other monasteries have fewer stairs, averaging around 140 each.