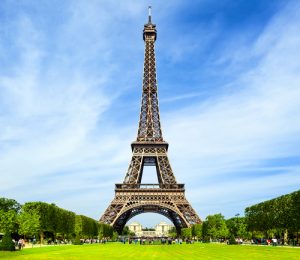 Located in the heart of Paris, France, the Eiffel Tower is one of the most famous monuments in history. But why was it built? Do you know how high it is? What does it weigh? Learn the answers to these questions, and more below. Begin your adventure with the Eiffel Tower NOW!

Fun Facts About the Eiffel Tower

Did you know that almost 7 million people visit the Eiffel Tower each year? That’s a lot of people. So, what makes the Eiffel Tower such an amazing place to visit? The tower was first built because there was a World’s Fair that was coming to Paris. It took more than two years to build. At first, most people who saw it didn’t like it because it was so different from all other buildings in the country. In fact, after the fair they almost tore it down! Today, people think differently and it is one of the world’s most amazing structures ever to be built. It takes over 500 people to keep it working and running properly.

The Eiffel Tower is 324 meters tall (that’s 1063 feet), and it weighs 10 tons. That’s as much as 5 cars stacked up, or two elephants. There are elevators in the tower to take you to the top for an amazing view of the city of Paris, but if you are adventurous, you can climb the 1,665 steps to the top. You WILL be out of breath.

Did you know that the Eiffel Tower doesn’t stay the same size the year ‘round? When the weather gets cold in Paris, France, the Eiffel Tower, made of nearly 7000 tons of iron, can shrink almost six inches! The tower is a beautiful sight to see in the daytime, but at night nearly 20,000 light bulbs make the structure light up the night sky so much that it can be seen from space.

With so much surface, guess how much paint is needed to paint the Eiffel Tower every seven years. 60 tons of paint are needed to keep the structure from rusting. That’s enough paint to fill almost two swimming pools that are four feet deep. Most don’t know this, but the Eiffel Tower is actually painted in three different shades of paint. The paint is lighter at the top, medium color in the middle, and the darkest at its base. This is to make it easier to see against the sky in Paris.

If the Eiffel Tower could talk, the ‘Iron Lady’ would tell you about all of the history that she’s seen. It wasn’t all fun and games, either. In World War I she operated as a radiograph tower overhearing enemy radio messages. After serving an important role in many wars, the Eiffel Tower had a hand in the discovery of cosmic rays as scientist, Theodor Wulf experimented from the top of the tower. Later, the Eiffel Tower became a movie star when she was featured in the film, Slumbering Paris in 1923. Today, the Eiffel Tower has been featured in millions of movies, television shows, paintings, photographs, and sketches. Last, but not least, thousands have proposed marriage to someone at the top of this famous landmark in the city of lights.

Learn more about the Eiffel Tower and other important monuments around the world with the Spartan And The Green Egg Explorer Sticker Starter Kit!