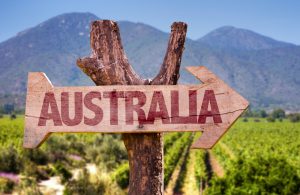 Australia is the smallest continent, but it has plenty to offer when it comes to food. Some of the foods Australians eat are derived from traditional English meals. After all, colonists from England settled here hundreds of years ago. However, Australians have managed to give these foods, such as meat pies and biscuits, their own spin.

Australian Favorites
Australians eat a variety of foods, ranging from seafood to Vegemite spread. While you’ll find tons of recipes available for Australian cuisine, some are considered more traditional than others. Anzac biscuits, made from oatmeal and coconut, are one example. Australians with a sweet tooth also enjoy a dessert called pavlova, which has meringue, fruit and whipped cream.

Australia also has its own traditional version of bread, called damper, which is meant to be baked over a campfire. What else do those living Down Under enjoy? Pumpkin soup is a local favorite, as are hamburgers topped with beetroot. Australians enjoy pumpkins in more than just soup, though. It’s a favorite vegetable and side dish, whether it’s mashed up with potatoes or baked on its own. Australians also make seasoned beef patties known as rissoles for informal dinners with friends and loved ones.

Seasonal Switches
Australia is in the Southern Hemisphere, which means that Christmas takes place during summer. Instead of cooking up hot comfort foods, such as ham and potatoes, Australians enjoy warm weather foods, including seafood and salads. They might spend the holiday feasting outdoors or even at the beach, rather than sitting around a dining room table.

Although June, July, and August are associated with wintertime in Australia, the weather is usually mild all year long. This gives Australians plenty of opportunities to have their meals outdoors, which many like to do. The mild weather makes it ideal for Australians to fire up the barbecue, or barbie, and cook up some shrimp or burgers.

Food Customs
Some Australians enjoy tea and biscuits in the late afternoon just as the English do. For Australian children, this serves as their snack when they come home from school. They don’t fill up too much, though, since they typically eat a large dinner a couple of hours later.

Australians have adopted elements of other cultures into their food in more recent years. That’s why you’ll find plenty of dishes that have influences from Greece, East Asia, the Middle East and more.