Learn MORE About the Pyramids of Egypt

What is square on the bottom, has four sides, and four triangles that come together in a point at the top? A pyramid of course! Most people think that pyramids were only built by the Egyptians, but actually they were built by many different groups of people throughout history. But the Egyptians took the art of pyramid building to new heights, building them bigger and stronger. To this day, nearly all of the pyramids that have stood the test of time are located in Egypt.

Fun Facts about the Pyramids of Egypt

Did you know that it took more than 100,000 people and close to 20 years to make the Great Pyramid, alone? The Great Pyramid has two million stone blocks, and each block weighs 5,000 pounds. Another amazing fact is that millions of blocks weighing all together between 2.5-5.5 million tons were cut, and transported to the construction site before they were precisely assembled to make pyramids. The Great Pyramid currently stands 451 feet high. To this day no one knows exactly how ancient Egyptians managed to build such massive structures, and no one today has been able to build one exactly like they did. 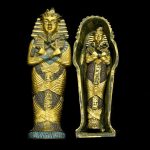 So why did ancient Egyptians bury their dead in pyramids? It was not just the body of the dead who were placed in these pyramids, but their treasured belongings as well. Ancient Egyptians were so loyal to their pharaohs that they wanted them to live forever. They believed that if they mummified the pharaohs after death and placed them in the tombs then they would live forever. Throughout most pyramids there are star chambers to allow the soul of the dead to pass out of the burial chamber and join their ancestors in the sky. The steep sides of the pyramids were made so that they could assist the kings’ souls to ascend easily to heaven.

A pharaoh’s tomb was filled with all types of precious metals, jewels, and artifacts during burials. Throughout the centuries graverobbers stole most of the contents within the pyramids in Egypt. However, those pyramids that were covered with sand before the graverobbers could find them are still being discovered today, full of rich treasures and artifacts from thousands of years ago. Scientists become excited when they make such a find because it gives them a look back at the history of an ancient time, and tells them how people lived and what was important to them.

The Egyptian Pyramids are Guarded by a Lion

Explore your world and the universe though the Spartan and the Green Egg Series. Join the Explorer’s Club, enjoy interactive games, collect travel pins and more! Learn about the world and the SGE Explorers Today!