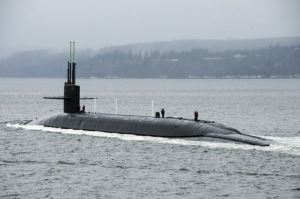 Mysterious and odd-shaped, submarines give workers ways to explore the deep sea. Submarines don’t just allow others to see the hidden parts of the world’s oceans though. They are also used to do many things in workplaces around the world.

At first glance, submarines look pretty special. The vessel can travel deep distances underwater. Inside the submarine are special tanks known as ballasts that hold large amounts of water. Submarines also have a power source. A power source is what helps power the vessel when it operates. A submarine may have different power sources: batteries, engines, or nuclear power. Some submarines use more than one of those power sources.

A submarine uses sonar to navigate through the darkest depths of the oceans in the world. Sonar puts out sound waves that bounce off objects around the submarine as it travels. When the sonar wave bounces off the objects, it sends back a signal to the vessel. A submarine usually has other equipment stored inside for crew

members. Inside, clean water, air, and various supplies are kept for the crew on board. 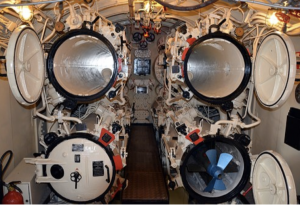 History of The Submarine

Submarines have a pretty cool history. Did you know the first submarine was not actually a submarine? The very first working submarine was a rowboat covered in leather!

Cornelis Drebbel, an inventor, made this early submarine in 1620. The vessel traveled depths as deep as 4.5 meters (15 feet).  In 1776, a US inventor named David Bushnell also made an early submarine. The submarine was later used in the American Revolution. A few years later, Robert Fulton built a small submarine named the Nautilus. The Nautilus helped attach small explosives to ships.

During the 1900s, inventors and engineers continued to make submarines that ran on newer power sources. By then, a submarine could run on an electric motor powered by a battery if the vessel was travelling underwater. Submarines could also run on diesel engines for traveling on water surfaces.

The US Navy’s vessel, the USS Nautilus, was first deployed in 1954 and ran on nuclear power.

Military around the world use submarines. Submarines protect the ships used in the Navy and also do other tasks. Scientists and researchers famously use submarines to conduct deep-sea research. A lot of the information about deep-sea creatures would not be available without submarines! Submarines are also used by salvagers to recover lost ship parts. Some places even allow tourists to ride in a submarine to see the deep sea first hand!

Water is very heavy. When it fills a submarine ballast, it helps the vessel become much heavier. When it’s time for the submarine to rise, the water in the ballasts is emptied. When the water leaves the ballasts, it makes the vessel lighter, so it can rise out of the deeper parts of water. To move around, a submarine usually has a propeller on its back end.