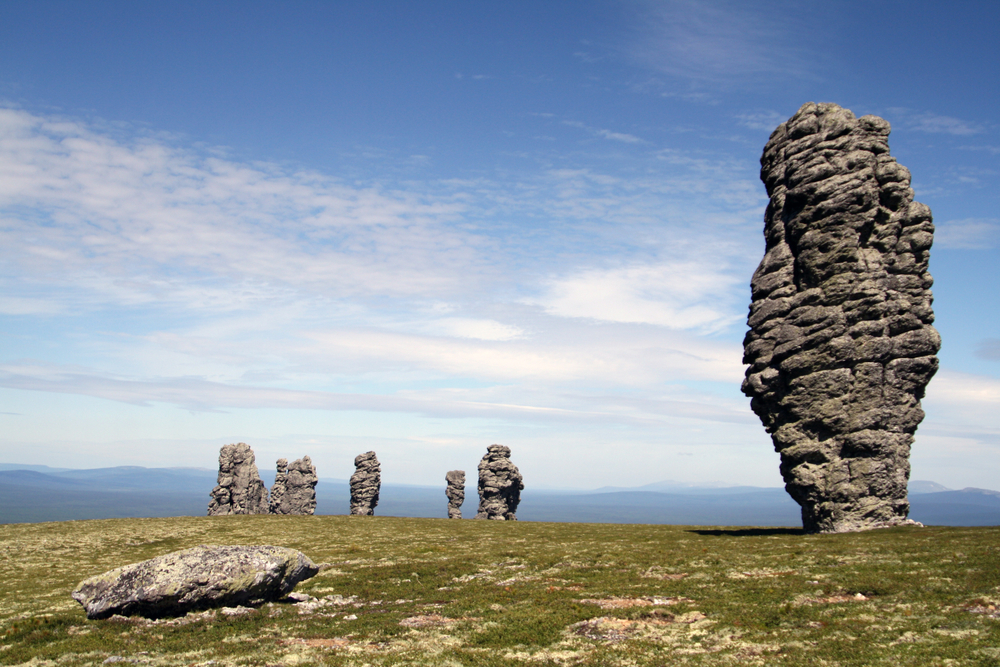 The Seven Strong Men Formations are so badly shaped that if you walked in the area at night they would cast 100 meter-long monster shadows and give you the creeps. Many who have done this swear that the shadows really do look like giant men! These formations are incredibly tall, ranging between 30 and 42 meters high. They may not be part of the Seven Wonders of the World but they are definitely recognized among the Seven Wonders of Russia.

The Story of the Giants that Formed Manpupuner

What everyone always asks is how the Seven Strong Men Rock Formations came to exist on a very flat part of the Ural Mountains. The Manpupuner Rock Formations are on the plateau part of the Ural Mountains, which is a fairly level part at the top. The local legends stat that one of the Mansi people who lived near the Urals crossed the border and encountered some giants. The giants started chasing the lost man near the Pechora River, but the tribe of Mansi blocked the paths of the giants and a powerful Medicine Man turned them into large pillars of stone. To this day they are frozen in place.

No Climbing on the Seven Strong Men Rock Formations

Anyone visiting Manpupuner Rock Formations is always advised against trying to climb the sculptures. There are helicopter tours that are arranged for visitors who would like to view the Manpupuner from air. But otherwise, visitors are told that the legend of the formation says that anyone that attempts to climb them will become just like them…frozen like stone!

The Seven Strong Men formation resides in the Komi Forest, which is a colorful home to over 200 species of protected plants and animals. That means on your trip to the formations you may encounter a brown bear, reindeer, or other rare types like the northern pika, golden eagle, or white-tailed eagle. The area is also surrounded by other mountains, rivers, and forests. This means that it is possible you will find more than the Seven Men Rock formations to interest you. Some courageous visitors hike up to the top of the plateau to view the formations from above. This hike can take up to three days! Helicopters can also take people up to view the formations from the air, if they can’t make the hike up the mountain.