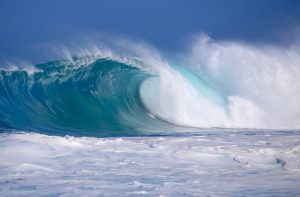 If you don’t live near an ocean then you may not know how connected to oceans you really are. But we are all connected to oceans in many different ways. That’s why it’s so important for us to keep our oceans healthy. If our oceans are not healthy then we won’t be healthy either. In fact, many of the plants and animals on Earth might die. Here are just a few of the many ways the world’s oceans connect us all.

Oceans Are Our Main Sources of Water and Air

Oceans cover more than 70 percent of the surface of the Earth, and many parts of the world’s oceans are very deep. That’s a lot of water, which we all need in order to stay alive. That goes for both human beings and animals.

Oceans are also the biggest sources of air. The world’s oceans produce so much oxygen that more than half of the air we breathe wouldn’t exist without them. They keep us alive just by existing. They also help us to keep a balance with nature. When we breathe out we make carbon dioxide, which plants need in order to live. So, oceans really help all plants, animals, and humans on the planet to stay alive.

Oceans naturally absorb heat from the sun and hold onto it. Then the natural water currents in the oceans circulate all of the world’s water and regulate the water and air temperatures around the world. If there were no oceans then the sun’s natural heat would escape back into the atmosphere, and many creatures on Earth would die.

Oceans Give Us a Lot of Our Food

No matter where you live in the world, you have probably eaten something that comes from the sea. Fish, crabs, lobsters, and many other creatures people eat as food live in the ocean’s waters. When the ocean is unhealthy in a certain area, the seafood becomes contaminated or the numbers of fish and sea creatures available drop. That leads to seafood shortages or people being too scared of getting sick to eat certain types of seafood. That’s one of many reasons why we have to keep our oceans cleaner.

In the days before airplanes, boat travel across the oceans was the only way for countries to explore or sell and trade goods with other countries. Even though planes allow fast transport of some materials today, the boating industry is still essential for transporting a lot of cargo from one country to another. Oceans also provide many opportunities for fishing and boat-related work that help to support local economies in countries around the world.

It’s not just goods that are transported across the oceans. People also use the oceans for travel and play. Imagine what the world would be like if nobody could swim, surf, or scuba dive because the oceans were too polluted. What if some of the ocean dried up and there weren’t fast sea travel routes between some ports anymore? Those are real problems that could happen if we don’t care for our oceans.

How to Use Your Ocean Connection

Now that you know some of the way the oceans connect us all, you can use your ocean connection to help protect the world’s oceans. Tell your friends and family to be more careful and not pollute the air or the water, even if you aren’t close to the ocean. Anything you can do to keep your part of the world healthier will help the ocean because everything is connected.