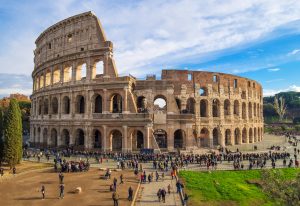 The Coliseum was what ancient Romans called a skyscraper because there was no other structure as big as a coliseum back then. That does not mean there were no other amphitheaters in ancient Rome. In fact, there were more than 250 amphitheatres but none was as big as the Colosseum. It is located in Piazza del Colosseo on the eastside of the Roman Forum. While it is a beautiful place to visit, this beauty came at a price, and there is much tragedy that surrounds this structure.

Fun Facts about the Roman Colosseum
The Emperor Vespasian started construction on the Roman Coliseum after a victory in battle. The money to build the Colosseum came from selling the treasure that the soldiers had taken from the defeated foes in Jerusalem. Vesparian came up with the idea and started to build in AD 72. To be more specific, the construction began more than 1900 years ago. However, Vespasian did not complete the construction and his son, named Titus, took over the building project and completed it in AD 80. After the completion of the amphitheater, it was 188 meters long and 156 meters wide, which is as high as a 12 -story building. That means that it so large that it could hold more than 50,000 visitors. It was so huge that it was held upright by 240 masts.

Gladiators, Swords, and Lions, Oh My!

When Vespasian constructed the Coliseum, he had in mind that he wanted to stage dangerous sports which would entertain the people in the city. So he made the Coliseum a ground for gladiators to fight and kill each other using weapons such as swords and daggers. Sometimes, the fight was between humans and dangerous animals like lions. If the ground became too stained, crews would simply pour more sand over the soiled areas and the fighting would continue.

Why Can’t We Be Friends?

Entertainment at the Colosseum was free for spectators and those who were invited. This is because all of the free food and drinks were paid for by the wealthy politicians in the city in order to remain popular with those who had voted for them. Sometimes the games would run for 100 days straight, with different people coming each day. That means that the city of Rome was very large with a lot of people. Though the ruins of the Colosseum are beautiful if you visit you should also not forget that many lives were lost within its walls.

The Colosseum was cleverly constructed with secret passageways underneath the main staging area. This was where the gladiators waited for their time to go into the ring, and it was also where the animals were kept. In later years there were 36 trap doors added, and a water pump so that the fighting area could be flooded with water to make a water fight for the people to watch. Today, there are no shows going on, but tourists in the thousands flock to see this historic area in Rome, Italy. The Colosseum is considered one of the new 7 Wonders of the World.