6 Most Unusual Bridges in the World

For as long as humans have been around, we’ve been using creative ideas and innovative building techniques to explore our surroundings. Often, that means creating ways to get across rivers, valleys, and canyons.

Bridges come in all shapes and sizes. Some have stood for centuries, like Greece’s Arkadiko bridge, crafted from stone in 1300 B.C. and still used today. Some of today’s bridges use amazing engineering techniques, while others look like beautiful works of art.

Here are 6 of the world’s most unusual bridges. 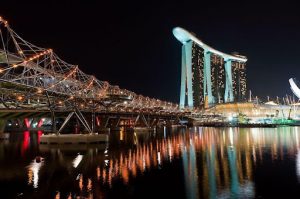 That’s because the bridge’s creators had the shape of human DNA in mind when they designed it.

With a span of 920 feet, this gorgeous bridge allows people to walk easily from one side of the river to the other. Viewing platforms are perfectly positioned along the walkway. It’s an ideal place to stop and take a few photos of the surrounding city.

At night, strips of LED lights turn the Helix Bridge into a giant, glittering jewel. The bridge is so beautiful that it’s become a popular destination for tourists and Singapore residents alike.

Would you be brave enough to walk across 1,260 feet of wooden planks hanging 950 feet above 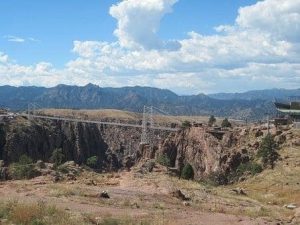 a river below? That’s exactly what visitors to the Royal Gorge Bridge ask themselves!

Built-in 1929, this suspension bridge is the highest in the Western hemisphere. The bridge has two steel towers, more than 2,100 strands of wire cables, and spans a deep canyon 956 feet below. It’s been standing since 1929.

The walkway itself is made of more than 1,250 wooden planks. Each year, 26 million people visit the Royal Gorge Bridge… but we’re not sure how many of them are brave enough to walk across it.

Spanning 8,071 feet across France’s Tarn River valley, the Millau Viaduct is a marvel of modern engineering. It’s the highest cable-stayed road bridge (a bridge held up by cables that cars can drive across) on the planet. 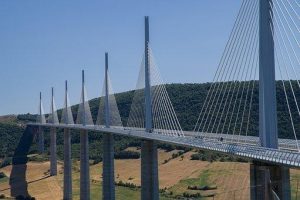 Its towers soar more than 1,100 feet into the air, making this bridge taller than the Eiffel Tower and almost as high as the Empire State Building! The bridge is so tall that, on a foggy day, it’s impossible to see the valley below. Drivers on the bridge say it feels as though they’re cruising above the clouds.

It only took three years to build this incredible bridge. The designers of the Millau Viaduct had to come up with an entirely new technique to make it work. Unlike other cable-stay bridges, the towers were constructed first, before the roadway was laid in place. 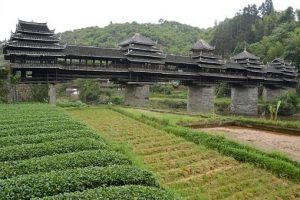 For centuries, the Dong people of China’s Guangxi Province have constructed strong, sturdy bridges… without using any nails! These gorgeous covered bridges are topped by towers, porches, kiosks, and pavilions that are meant to offer shelter from the weather. That’s why they’re known as “wind and rain” bridges.

Among the most famous is the Chenyang Wind and Rain Bridge. Just over 213 feet long, the bridge spans the Linxi River. It’s made completely from wood and stone, without any nails or rivets.

The soaring pavilions — up to four stories high — sit on sturdy stone towers in the river. The Dong craftsmen were so good at making the wooden pieces fit together perfectly, that the bridge has been standing for more than 100 years.

Is it a bridge? A building? A sculpture? The Twist is all three and more. Spanning the Randselva 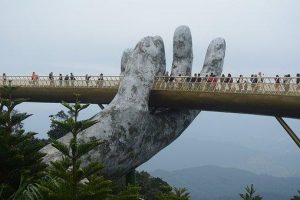 River in Jevnaker, Norway, this unique bridge is truly a work of art; part of the Twist’s interior space even houses an art gallery.

The bridge is located in the middle of a forest, and designers had to overcome several challenges, including different heights at each end of the bridge. Architects came up with a clever solution: Twist the entire bridge by 90 degrees.

That means when you walk through the bridge, the ceiling and floor switch places. At the twist, the ceiling flows down the wall to become the floor, while the floor stretches up the other wall to form the ceiling.

Just north of Da Nang, Vietnam lies one of the world’s most unique-looking bridges. The Golden Bridge stretches for 500 (golden) feet across a beautiful forest. But the most amazing part about this bridge is that it’s held up by two giant hands.

Walking across this shimmering bridge is like entering your favorite fantasy novel. Though it’s just a few years old, the hands are crafted to look like ancient stone, carefully holding up a glittering golden thread. Adding to the fun, visitors take a cable car ride to climb slowly up the mountain to reach this magical bridge.