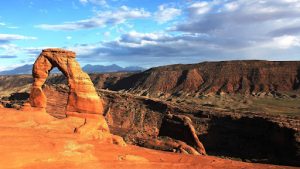 Canyons are steep, narrow valleys that may also be known as gorges. They’re formed over millions of years by river movements, erosion, and tectonic movements. River canyons are the best-known type of canyon, but they’re also found under the ocean.

River Movements
A fast-flowing river can cut into a riverbed by washing sediment downstream, creating a deeper channel. This type of river becomes known as an entrenched river because they don’t change course like a typical river with a wide, flat floodplain. The Yarlung Zango Canyon in Tibet is the deepest River Canyon in the world. It’s more than 17,500 feet in some places and is also one of the longest canyons in the world, at 310 miles. 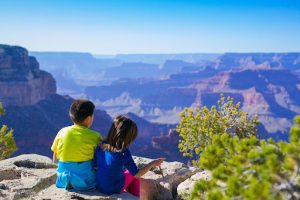 and thaws. This process begins when water seeps into cracks in rocks. The water freezes, causing it to expand and make the cracks bigger. The rock erodes and water fills the cracks again during heavy rains, causing more erosion. Over time, the canyon grows wider at the top than the bottom. This cycle repeats itself when the water freezes again.

Erosion like this forms slot canyons when it occurs in soft rock like sandstone. Slot canyons are unusually narrow and deep, sometimes less than three feet wide and 1000 feet deep. These types of canyons can be dangerous because the sides are often very smooth, making them difficult to climb. In some cases, canyons form in areas with soft rock lying on top of harder rock. When this happens, the canyons develop cliffs and ledges when the surface rock erodes, making the canyon walls look like giant steps.

Tectonic Activity
Tectonic plates are large pieces of the Earth’s crust and upper mantle. They shift and collide with each other over millions of years, causing changes to the Earth’s surface. Tectonic activity can sometimes cause land to rise above the surrounding area, which is known as a tectonic uplift. They can create mountains that glaciers and rivers cut through to create deep canyons.

The Hudson Canyon is one of the longest canyons of this type, at a length of 450 miles. It was formed by the Hudson River, which is located between the US states of New York and New Jersey. The Hudson Canyon was the riverbed of the Hudson River during the last ice age when sea levels were lower. Ocean currents that are strong enough can also form submarine canyons by sweeping away sediment.

Ocean currents that are strong enough can also form submarine canyons by sweeping away sediment. This process is similar to the way that rivers on land can erode riverbeds. Wittard Canyon, off the south coast of Ireland, is a well-known example of this type of canyon. Scientists believe this canyon was formed thousands of years ago when glacial water flowed into the Atlantic Ocean.