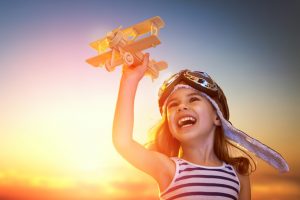 Ever wanted to fly? Boarding an airplane is an easy way to fly today. It wasn’t an easy journey to get there. For years, flying seemed too hard. That didn’t stop people from trying out many ways to fly. After going through trial and error, humans finally flew the early airplanes. Today, we still enjoy many ways to fly high in the sky, going to many amazing places on airplanes with our families.

How Airplanes Came to Be

The history of airplanes started earlier than you think!

In 400 A.D., the Chinese first experimented with flight by inventing the kite. The invention of the kite made many Chinese scientists look into how kites and wind currents worked together. By 1485, Leonardo Da Vinci, the artist, famously drew many pictures of flying machines. Although people began experimenting with building an airplane that worked, the first successful motor-powered aircraft flew in 1903. The Wright brothers famously invented the first aircraft that ran on motor power.

Orville Wright rode in the first aircraft after it came to life. He flew as far as 120 feet (36 meters) in about 12 seconds. The Wright brothers’ achievement showed that true flight in an aircraft was now possible in the western world.

An airplane can defy gravity!

Gravity is an invisible force that holds down everything on Earth. Gravity also affects everything on and around the planet. Getting an airplane into the air involves defying this very strong force. The length and shape of airplane wings make this happen.

Airplane wings help make the device lift in the air. The airplane body is thin and long, which helps the airplane defy gravity. The engine helps give the airplane enough power to thrust forward and travel through the air. When each part of the airplane works together, the entire airplane can move past the drag caused by air currents and the heavy pull of gravity to fly freely.

From gliders to fighter jets, airplanes come in many different forms. It’s because the design of airplanes changed over time!

The glider used to be motorless. It worked by being pushed forward by a sharp gust of air when a rider jumped off a high place. Gliders today have a small motor engine that helps them stay off the ground and boost their flying time.

Passenger airplanes are what people first think about when they imagine airplanes. These large aircraft hold dozens of people at a time. They travel all over the world during every hour of the day.

Helicopters are also common types of planes. They are known for their large propeller blades that sit on top of the body. The blades create motion and help lift the aircraft when they work. A helicopter is usually built to carry a few people at a time.

Like helicopters, fighter jets and planes are also designed for a few passengers. They are used in special industries like the military. They are known for their incredible speeds. Many jets can reach speeds as fast as 2,574 kilometers (1,600 miles per hour)!