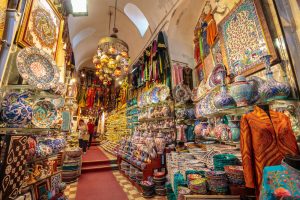 How old is your local mall? Chances are it can’t come close to the age of Istanbul’s Grand Bazaar. Bazaar is a word that means ‘market’, and the Grand Bazaar earns its name. This market is over 550 years old! It is so big that it has five mosques (a Muslim place of worship), a school, seven fountains, and forty hotels. Get your shoes on, because you will do some walking at this Istanbul landmark.
Fun Facts About the Grand Bazaar
The Grand Bazaar, also called the Kapali Cars, has almost 60 streets running through it. The combined area covered by all of the different retail stores in the Grand Bazaar is about 31,000 square meters. How many stores? Try 4000! That’s a lot of shopping!! More than 300,000 people visit this area of Istanbul each day. This miniature city within a city has also had a mysterious function, acting as a rendezvous point for spies from all sorts of countries who could meet at the Bazaar, and if necessary, could get away by using the maze-like streets to make their escape.
Exactly How Old is the Grand Bazaar?
The Bazaar was specifically opened in 1461and has never stopped selling its wares since then. However, the Bazaar did have its fair share of tragedies. In 1894, an earthquake occurred in Turkey and destroyed a good part of the market structures. There have also been fires that have ravaged buildings in 1515 and 1548. Finally, the city officials passed a rule banning fires in the marketplaces, and this stopped the widespread devastation caused by fires getting out of control each year. The good news is that the destroyed parts have been restored over the years and currently the market is in better shape than ever.
It’s A-Maze-ing!
If you go to the Grand Bazaar you’d better enjoy mazes. There are so many streets which look the same that you may take hours to find your way out if you are lost. This happens mostly to first-time visitors. Most don’t mind being lost, though, because there is just so much to see along the way. But, if you should ever visit, just remember that the streets are named according to the items sold there and there are two main streets as well as four entry gates to the Bazaar. This was originally done so that shoppers could find what they were looking for all in one section. Early visitors to the Bazaar were amazed that there were no advertisements or signs up over the shops to say what was inside.
Get a Good Deal at the Grand Bazaar
While walking through the Bazaar, it is common to hear people bargaining to get better prices. Should you visit the market, take time and bargain your way through anything. There is nothing to be embarrassed about bargaining because the seller wants you to do it anyway. Your little money goes a long way at the end of the day. What can you buy at the Bazaar? You can get anything from clothes, school bags, or belly-dancing costumes!