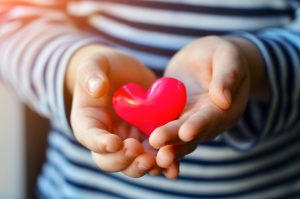 Valentine’s Day is a day in February when people give each other nice gifts to show their love for someone. This can be a mom or a dad, a brother or sister, or for grown-ups, it can be a gift that they give to their partner, boyfriend/girlfriend, wife or husband. Did you know that over one billion Valentine’s Day cards are given and received each year? But how did it start and where did this flower, card and candy-crazy holiday come from? The answer might surprise you.

The holiday is named after a holy man, named Saint Valentine, who lived in England many centuries ago when the Romans ruled the land. The Emperor decided that he needed more soldiers and that single men made better fighters. He outlawed marriage for men under a certain age. St. Valentine did not listen to this order and secretly married young couples. The Emperor found out and St. Valentine was sentenced to death. It was reported that he sent a letter to someone from his jail cell before his death. He signed it, “From your Valentine.” To this day the notion of honoring someone you care about by giving them a Valentine card comes from this first action.